Last week I travelled to the city of Hamburg. I’d visited Germany several times before, but my trips had been limited to cities and villages in the south. Hamburg, by contrast, is a seaport on the northern coast of the country, and is actually closer to Denmark than it is to the Bavarian capital of Munich.

My plan was to rendezvous with Oli who was part way through his interrailing trip so we could enjoy a nice, lazy week of sunshine, coffees, and uniterrupted lay-ins. Our expectations were quickly shattered when, upon arriving in Hamburg, we realised that the city was in the throes of its “Welcome to Hell” G20 anti-capitalist protest. Over 12,000 demonstrators and 20,000 German police officers took to the streets as the world’s most important politicians (including  Putin, Trump, and Erdogan)  gathered for the Summit.

Police vans patrolled bumper to bumper, helicopters loomed overhead, and shops boarded up their windows as the city prepared for both peaceful protests and anarchist riots.

Just outside our apartment window, a sofa was torched by self-proclaimed anti-fascists, then extinguished by police. Large bonfires and barricades were built on our block, bottles were smashed, flares ignited, water canons fired. The streets were filled with chanting, sirens, smoke – and a lot of curious bystanders watching from the sidelines with bottles of beer and glasses of red. I unknowling participated in a peaceful street rave, and the energy was contagious!

Graffiti on the roads warns police that they are not welcome. 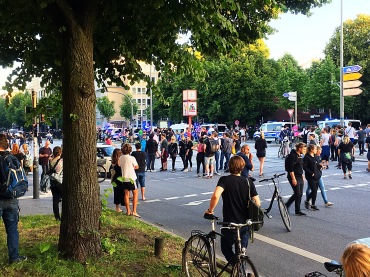 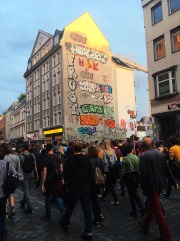 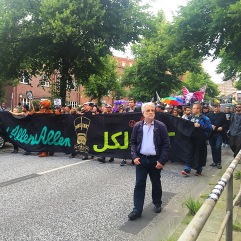 People from all backgrounds joined in peaceful parades and protest on the eve of the G20 Summit.

Shops that became targets for ant-capitalist rioters boarded up windows and closed for the weekend. 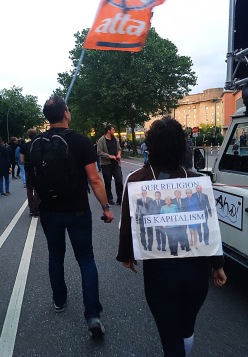 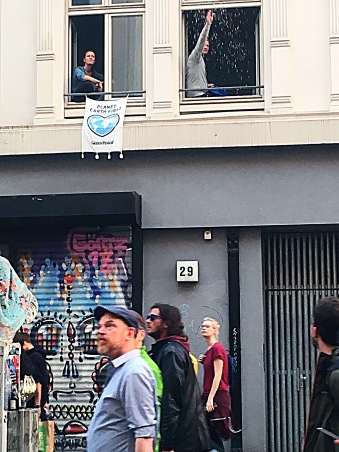 Many locals were supportive of peaceful protests. Here, onlookers sprinkle confetti into the crowd. 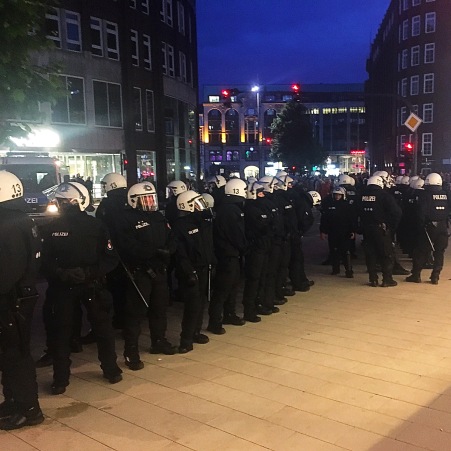 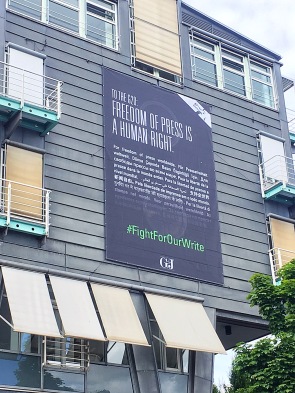 And somehow, despite the chaos of the riots, the city still felt orderly, colourful, clean, trendy – and the trains ran on time. It’s definitely one of the coolest cities I’ve ever visited, and I can’t wait to go back.

Flights from the UK are very cheap. From Manchester, I flew with RyanAir directly to Hamburg Aiport (or Flughafen Hamburg). The return flight was £18, departed early Monday morning and returned to the UK on Friday morning. The flight is just over an hour in duration from Manchester Airport, making this an ideal minibreak destination.

Public transport in Hamburg is the best I have ever seen. Clean, reliable, easy, and cheap. It costs about €3 to get from the airport to Sternschanze where we were stayed, and takes about 25 minutes. Even in the middle of the G20 riots when the streets were on fire (I’ll get to this in a minute!) the public transport was running flawlessly.

You can buy day and week passes for the u-bahn and s-bahn, but since I walked mostly everywhere, I just bought a few single tickets – about €10 in total over 5 days, including tickets to the airport. The ticket machines have an English language option, and the transport map is really easy to understand.

I managed to bag an Airbnb apartment in the quarter of Sternschanze which is known for its Bohemian vibes, alternative shopping, and vibrant nightlife. The streets are simultaneously relaxed and edgey, with tall leafy trees, fun neon grafitti, fresh fruit stands, and lots of outdoor seating areas for diners and drinkers.

Our Airbnb set us back a very reasonable £60 per night (divided by 3 people) – and it was brilliant. The “shabby chic”, newly renovated, private one-bed flat had a beautiful master bedroom, optional sofa bed in the living room, small, fully equipped kitchen, and a modern bathroom with shower. It was squeaky clean, and was very bright and airy with high ceilings and windows opening onto the street below.

Our host, Ina, was considerate and helpful, and even offered to collect us from the flat and drive us to the airport if we had problems using the s-bahn during the riots. 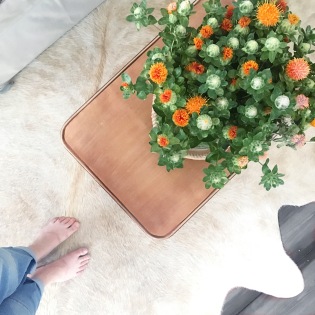 Codos | Bartelsstraße 26, Sternschanze | coffee
Discovered the best cortado in the world, and revisited Codos every morning. There were also several tasty cakes and pastries on offer. Just be warned that since they are a “brewbar” and not a cafe,  there are only a few barstools inside for sitting in. Most people seemed to order takeaway coffees in (reusable) cups. 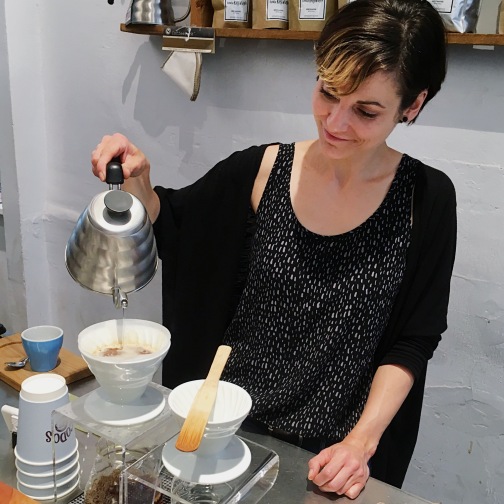 Cakes, croissants, and the best coffee!

Breakfast in bed with takeaway cortados and croissants from Codos.

Paul und Pisque | Schanzenstraße 31, Sternschanze | independent boutique
Really cool clothing shop with their own in-house fashion line, made locally in Hamburg. I purchased a 100% wool coatigan, and the staff even offered to hem the sleeves on it for me for the next day.

Balutschistan | Schulterblatt 88, Sterschanze | Pakistani buffet
Very simple and affordable lunch buffet with lots of vegetarian options. Not gourmet, but really delicious and a great option for budget travellers and backpackers.

Port of Hamburg | sightseeing
It’s definitely worth a wander down to the Port for a gander at Germany’s “Gateway to the World”. It’s a busy harbour with lots to see and do.

Saliba | Neuer Wall 13, 20354 | Vegetarian Syrian mezze
Nestled under the beautiful arcades of the Alsterarkaden, this amazing little place is hard to beat with its veggie platters, authentic middle eastern desserts, ayran (mint and yogurt drink), and amazing views of the canal. Prices are mid-range, but completely fair and still very affordable.

Lunch with a view.